Here in Melbourne, we had an hour extra in bed this weekend as the clocks went back to Eastern Standard Time. The weather has changed: nights are cooler and scarves are out. It will soon be time for warming soups and for warding off coughs and colds. So the question is – how essential is echinacea for everyday use in winter? And also what did we do before we had echincaea? 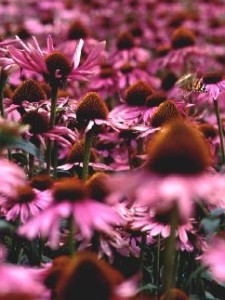 Echinacea was a bit of a non-starter when I was a herbal student. We had heard about it in class, but it was rarely used. That was the 1970s when the concept of the immune system was new to medical science – Illich says it was not referred to in any textbook of biology until 1972.  So as herbalists didn’t talk about plants which effected the immune system, and we didn’t use echincaea.

But we did treat coughs, colds and flus successfully.

I had a great herbal teacher in those years – a teacher from  outside the classroom. My hours of clinic observation were a joy – sitting with an experienced herbalist, watching her, discussing, questioning. she came from a strong herbal tradition – she had learned her herbal medicine from her physiomedicalist father, who was a leader in UK herbal medicine in the early 1900s. She lived her philosophical roots. She  talked to me about the importance of assessing how the vital force was struggling in her patients, and understood that her job was to support it via herbs and advice. She understood acute conditions to be an indication that the vital force was struggling, but strong.

For coughs and colds – and for any acute condition – rather than using echinacea, she routinely prescribed warming herbs to stimulate the vital force. For her, this was mostly in the form of Composition Essence which was a mixture of spicy herbs at the heart of physiomedical prescribing. Her understanding was that it stimulated the body to overcome whatever acute illness it had contracted. She as also careful to watch for the signs that this was too much stimulation, that the vital force of this particular patient was not strong enough to respond well to her treatment.

Some of the ingredients of Composition Essence are less availble now then they were back then, and I haven’t seen it on sale, or reference to it, for decades now. However there is anther combination that reminds me of its use. It’s called Fire Cider, and it is causing some legal controversy. in the US. The court case involves the trademarking of the name, and has got many herbalists up in arms. I am not following it in detail, but it is of interest that Fire Cider would appear to have similar actions to Composition Powder – warming, but more kitchen- friendly with ingredients are readily available. Here’s a basic recipe 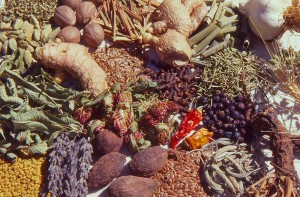 Dried herbs and spices can warm and ward off early stages of colds and flu. Photo Jenny Grinlington

These, with other additions as desired, are macerated in apple cider vinegar for three weeks and then used as a tonic daily or when you feel a cold coming on. Get more of the story, many ideas and full instructions here.

Composition Powder (Colby) – note this is way more than you would need for your family for winter – 3.5 kilos of herbs!