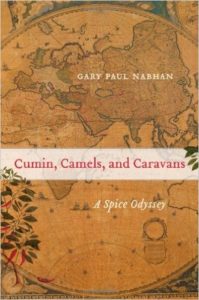 This is a fascinating and thoroughly engaging book.

Grounded in a long family history of spice traders, Nabhan, a Lebanese-American agricultural ecologist and ethnobotanist, travels along ancient spice routes and re-imagines the experiences of those whose livelihoods have been bound up with plants as they navigate changing social and political circumstances.

A strength of the book is the way in which Nabhan demonstrates the historical examples of many contemporary issues. He begins the book by describing the lives of Jewish and Muslim spice traders as examples of globalisation, of people living globalised lives, ‘trading a placed-based existence to one that is essentially placeless’.

A second theme is the role of middlemen. The opaque nature of long herbal supply chains is today at odds with increasing calls for transparency around herbal sourcing. With few exceptions, it is difficult to get reliable answers about the origin of the herbal products we use, as many middlemen take their cut the growers or collectors are paid little, the consumers pay a lot.

The spice traders of old understood that to maximise profit they had to separate suppliers from customers. While those who collected the plants were kept ignorant of value of their products to the consumer and the consumer was kept ignorant of the origin of the spices, healthy profits were available for the traders. The more fantastic the stories told to medieval European customers about the origin of the spices, the more adventure and daring said to be involved, the higher the prices. While we may not be taken in by stories of mythic beasts today, the mystique of exotic herbs still plays a role in their marketing.

Finally, Nabhan argues that it is not only the people but also the plants that have moved around the world, influencing cuisine as well as medicine – his book is richly illustrated with recipes to make this point. He describes the great Moorish gardens of southern Spain which were established by the introduction of plants from the Middle East to Spain after the Muslim conquest, an early example of ‘ecological colonisation’

‘Dates, Damascus apricots, figs, olives, and pomegranates were planted everywhere that the Iberian soils could support them, and beneath or between their canopies sprouted capers, saffron, anise and spearmint.’ This was in the 8th century!

Over the centuries, these plants have been adopted and have become part of Spanish cuisine and culture, no longer popularly understood as introduced species. The foreign has become accepted.
Will it take another thousand years for the European medicinals (introduced into Australia 200 years ago) to become similarly accepted?

Overall, the book is a treat for anyone who loves stories of plants and the people who work with them.