Ann Doyle was a young convict who came to Australia on the infamous ‘floating brothel’, the Lady Juliana.  She was one of about 230 women who arrived in to the starving Botany Bay colony in June 1790, seventeen months after the first First Fleet had landed, bringing the first European settlers. Ann was twenty at the time.  Almost immediately she was sent on to Norfolk Island, where she would go on to have four healthy children.

Ann is my great grandmother’s great grandmother.  She was sentenced to death in Maidstone, Kent in 1787, as a 17-year old for stealing clothes and linen to the value of one guinea. Her sentence was commuted to seven years transportation, but it ended up lasting thirty. She died in Hobart, Tasmania at the age of fifty, having made her home there.

Whie there are many unanswerable questions about her life, there are some aspects of it which we can reconstruct. I am particularly interested in how she kept her children healthy. How did she look after them when they were ill? What medicines were used in those days? How did she cope in this new, strange land?

Enter Joseph Banks, the great botanist, wheeler and dealer and friend of kings, lover of the good life – and of many women (but not Ann).

We know that Joseph’s love of plants was well established during his school years, when he learned about medicinal plants by paying local herb women to teach him – sixpence a specimen. He had traveled to Australia with James Cook, but by the time the new colony was established, he was head of Kew Gardens and his job was to choose the plants to come here. 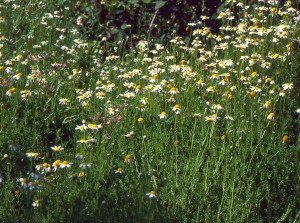 What were the medicinal plants he chose? We know they included sage, chamomile, hyssop, fennel, garlic, mint, marjoram, lemon balm, borage and thyme. We know that the ship’s gardener (yes, this was an important role on these voyages) was given detailed instructions about the care of plants on the long voyage, and he was required to report back to Banks regarding the state of the plants whenever the ship reached land.

We also know that a herb garden was established in Sydney a short time after the arrival of the first settlers –  March 1788, and it was to ‘provide for the needs of Sydney General Hospital’.

It would seem logical that when the new settlers were sent from Sydney to uninhabited Norfolk Island in 1790 that they would have been some of these medicinals would have accompanied them.

And living on an island in the middle of the Pacific, one could do a lot with that little lot of herbs –  sage, garlic and thyme to deal with many infections, chamomile and lemon balm for digestion and problems of the nervous system, fennel and mint for bloating and cramping…

For Ann at least, whether through the plants or other factors, the family was healthy, as shown by her many descendants.