Helen of Troy: also a herbalist?

Helen of Troy’s beauty is the stuff of legend, but her association with herbal medicine is less well known. I came upon this connection via  two plants – elecampagne (Inula helenium). and thyme (Thymus vulgaris). There are stories say that she was carrying flowers of elecampagne when whe was carried off to Troy by Paris.. Other stories suggest that thyme grew from her tears. 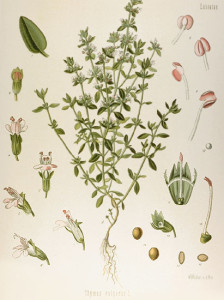 Both thyme and elecampagne are used for respiratory problems. In some traditions, respiratory problems are associated with grief, particularly unresolved grief. So what was it about Helen’s life that was sad? Well, while we don’t know about her won state of mind, we do know something of the grief and torment that was waged in her name.

Helen of Troy, the face that launched a thousand ships, was the daughter of Zeus (king of the gods) and Leda (a swan). She had many suitors, and those men who wanted to be considered as a potential husband  agreed they would defend the honor of the successful suitor if ever it were threatened.

Some time after this Paris, a young prince from Troy, won Helen’s heart – or abducted her, depending on the version of the story you read. Whichever way it went, the event led to the Trojan war which was immortalised in Homer’s Illiad and Odyssey. Over the centuries, Helen is the figure who is credited (or blamed) with triggering the long and bitter Trojan War. This led to the desuction of the great ancient city of Troy, a city which had been thought to be invincible.

Against that background, we know very little of Helen. Did she go willingly or unwillingly to Troy? did she return to Sparta with Menelaeus at the end of the war? did they live happily there, or was she exiled to the island of Rhodes, and what happened there?

Some accounts say that she spent the years of the war in Troy, but others say she was in  Egypt, a great seat of learning, particularly about medicine. Did she learn about medicinal plants here?

Homer gives this example of Helen’s use of medicinal plants. Telemachus son of Ulysses went looking for him (Ulysses, a Greek hero, took a long time to get home after the war), and visited Menelaeus and Helen on the occasion of the weddings of their son and daughter (separate weddings – the son and daughter did not marry each other). Telemachus is recognised at the event because of his strong resemblance to his father. When discussions turn emotional, with Menelaeus suggests they defer their conversations till after the wedding, but Homer states

Then Helen, daughter of Zeus, took other counsel. 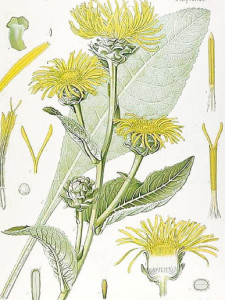 Straightway she cast into the wine of which they were drinking a drugto quiet all pain and strife, and bring forgetfulness of every ill.
Odyssey, Book 4, v. 219–221

This drug was the Nepenthe –  Nepenthes pharmakon – the legendary remedy for grief.

So Helen and sadness? Yes, not only the sadness of the destruction of a great city but also of a son looking for his father. And the many children who lost their fathers in that war.