Hippocrates is credited with the phrase ‘let food be thy medicine and medicine be thy food’ (tho you won’t find those exact words in his writings) and this reflects the way medicine was practiced at that time – the 5th century BCE – two and a half thousand years ago. Scholars of ancient medicine paint a picture of doctors instructing people to prepare local plants in recipes that they prepare themselves, with ingredients that are not fixed but often depend on what is to hand.

This is an abbreviated version of an article on Hippocratic medicine I wrote recently, and you can read it here.

The article draws on the work of a number of scholars of the Hippocratic Corpus. Hippocrates probably didn’t write any of the Hippocratic works, rather they are the work of his followers – and they were written over a period of 700 years. My friends Alain Touwaide and Emmanuela Appetiti from the Institute for the Preservation of Medical Traditions have made a lifetime study of the medicinal plants of antiquity and in a recent article they document 380 species of medicinal plants which were used throughout the Hippocratic Corpus. These plants were used for a total of 3480 uses. Some plants were mentioned often, up to 87 times, and others were mentioned just once. On analysis, 40% of the documented plant uses come from just 44 plants. Furthermore, 77% of these plants (34 of the 44) were also eaten as foods (Touwaide & Appetiti, 2014).  So while many plants are mentioned in the Corpus, a small number are used regularly, and a many more were used rarely.

The majority of these commonly used plants are well known today and include galic, celery and cabbage as well as culinary herbs such as sage and oregano, and herbal favourites such as elder. Touwaide and Appetiti suggest that these plants were cultivated close to patients’ homes and eaten fresh – these plants were cheap and easily available. In other research, Pitman (2014) indicates that plant preparations in ancient Greece are similar to those used today – including infusions and decoctions (the herbs being strained or pressed); plants prepared in honey, wine or vinegar, or made into lozenges or pills. 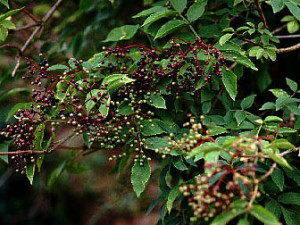 So it seems that in the time of the ancient Greeks, medicine was seen as something that was treated at home, using locally available plants, prepared in the kitchen. The grassroots herbal medicine movement is truly revitalising a very old tradition.