Animals, birds and the elder tree: how do we learn?

There’s a new academic discipline –  zoopharmacognosy, the study of the use of medicinal plants by animals, particularly primates. 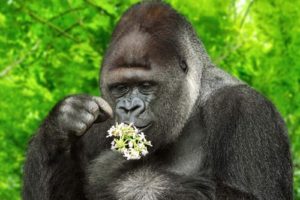 But wait, I hear you ask – surely that is a basis of traditional herbal knowledge? Wasn’t observation of animals one of the ways humans learned to use plants as medicine?  Well yes – but of course such reports observation is largely anecdotal and therefore suspect. Zoopharmacognosy my friends, is a science.

However, I like anecdotes.  They are often relayed as stories, and I enjoy stories. So here is one about birds and elderberries, and the herbalists who observe them.

About ten years ago, the avian flu was causing concern. In one of the UK email discussion lists, there were reports of research  that had shown that a constituent of elderberries was active against the virus causing avian flu. This was of course of great interest to herbalists, and very soon the conversation turned to the difficulties in gathering the berries that year – something that had not occurred previously. Elder is not a plant associated with scarcity. Autumn harvests of elderberries are common in many of the areas where these herbalists live and work, the berries being used for jams, cordials and medicines. Elder trees are generous, and typicallly provide and abundance of berries, which are easy to pick. 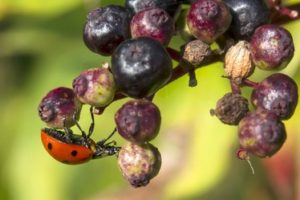 But that year, birds had picked the elder trees clean before the herbalists could get to them. One practitioner told how she was to teach a class of students how to make elderberry syrup for family coughs and had planned to source the berries from a tree in the local churchyard. ‘There was a great crop of berries there on the Friday, but when I came back on the Sunday to pick them, they were all gone. All’ she emphasised

Another herbalist related that an elderly pigeon-fancier had come to see her asking to purchase elderberries. Each winter, he was in the habit of collecting berries to give to his pigeons to protect them from the flur, but this year the trees had been picked clean by birds when he went to harvest,  and so he was looking for an alternative supply.

The discussion on the list went on for some days, with some herbalists being quite sceptical of the link between the research and the implication that others were making about the wisdom of the birds, that  the birds somehow ‘knew’ they needed more elderberries this year. Others were equally convinced that this was the case, and gave other examples of their observations of household animals – horses, dogs, cats, cows – seeking out and ingesting specific medicinal plants when they were unwell.
What I loved about this extended online conversation was it showed herbalists observing nature, observing beyond their clinical practice, to the trees, the birds and animals. They were noting the reactions of both humans and animals to medicinal plants.

The zoopharmacologists may be travelling to distant jungles to observe monkeys and find exotic rainforest plants that pharmaceutical companies can commercialise and bring to market, as this article indicates. These herbalists contintue to observe the natural environment close to home and use it to add to the collective wisdom about some of our well loved and local plants.